The da Vinci Xi System is the fourth version of the surgical robot made by Intuitive Surgical.  The “robotic” device is used by doctors to perform minimally invasive procedures with the idea that the device gives doctors improved control during surgery so as to be able to make smaller incisions.  The upgraded Xi version includes overhead surgical arms with greater range of motion and thinner arms than previous designs.  The upgrades were designed to allow doctors to reach all parts of a patients’ anatomy during surgery without having to reposition the machine.  Gary Guthhart, president and CEO of Intuitive Surgical, was quoted in a Medscape article explaining that this new da Vinci Xi System represents “…an innovation long sought by surgeons who perform complex procedures.”

The former da Vinci systems have been the subject of numerous lawsuits and FDA investigation about the device’s safety. Among other things, it was reported that the system would stall after the arms caused each other friction, resulting in potential injury to internal organs in patients.  Since the year 2000, when the da Vinci surgical robot was first approved by the FDA in the U.S., the device has been subject to numerous complaints about its safety and effectiveness.  As noted in the Medscape article, the number of FDA “adverse events” involving injuries – including death – increased dramatically between 2011 and 2012, as published by the FDA in January 2013. Intuitive Surgical has faced numerous lawsuits from patients asserting personal injury claims on various grounds related to the safety of the device.

The fallout from the negative publicity reportedly caused Intuitive Surgical’s stock price to fall about 10% last year.  To the extent it is more sophisticated than prior versions, arguably more physician training will be needed before the system should actually be used on patients, particularly since the older system’s interface was reportedly difficult to use.  Also, lack of physician training in how to use the older da Vinci system was one of the subjects the FDA cited when surveying surgeons about its safety.  The “training gap” along with the system’s difficult interface were alleged to have contributed to patient injuries.

News of the “upgrades” in the new Xi da Vinci system, along with the FDA clearance, has apparently prompted a surge in Intuitive Surgical’s stock.  Only time will tell whether the new Xi system is actually safer than its predecessors or whether the new system is in fact easier for physicians to use during surgery.

If you, or a loved one, have experienced problems that may be related to a robotic surgery using the da Vinci robot surgical system, contact the experienced attorneys at Audet and Partners, LLP for a free evaluation of your legal options.  Call us at (800) 965-1461 or fill out our confidential case inquiry form on the right side of this web page. 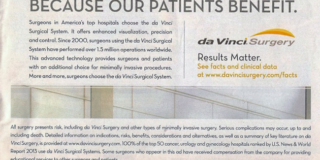 A recent article in the Chicago Tribune has levied criticism against doctors for appearing in a national advertisement...