A federal court in California has looked to the Federal Arbitration Act in upholding mandatory arbitration agreements as a bar to employment claims under the California Private Attorneys General Act (PAGA).

Sitting in the U.S. District Court for the Central District of California, U.S. District Judge Jesus Bernal granted a Motion to Compel Arbitration brought by defendant 20/20 Communications, Inc. In so doing the court rejected arguments advanced by plaintiffs that pursuant to the California Supreme Court decision in Iskanian v. CLS Transportation issued in June 2014, such arbitration agreements re unenforceable as against public policy.

Judge Bernal based his ruling, in part, based on the role of federal courts in interpreting the Federal Arbitration Act.  In relying on this role, the federal court effectively sidestepped any need to defer to California state courts findings related to state laws such as the Private Attorneys General Act.

The court did, however, acknowledge the position of the California Supreme Court which looks “unfavorably” upon PAGA claim waivers.

Thus it appears for now that PAGA claims may survive mandatory arbitration clauses in state courts, but will find an uphill battle in federal courts.

Audet & Partners, LLP continues to investigate PAGA claims on behalf of employees for a wide range of workplace violations.  If you believe your rights have been violated by your employer, please contact a PAGA attorney at Audet & Partners, LLP for a free, confidential consultation either by calling (415) 508-6263, or by completing and submitting our online inquiry form on the right side of this page. 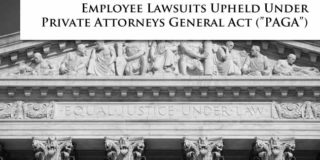 Audet & Partners, LLP reports that a recent ruling by the Ninth Circuit Court of Appeals holding truck drivers to be employees rather than independent contractors of Affinity Logistics Corp. has been appealed to the U.S Supreme Court.  In June, the Ninth Circuit held that delivery drivers had been improperly classified by Affinity as independent contractors based primarily on the degree of control that Affinity maintained over the drivers' working conditions. The Affinity case was originally filed in... 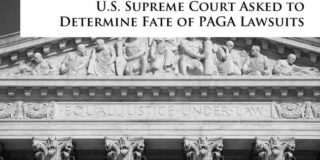 Within California, an extensive list of employment-related legal violations may be pursued by individuals acting as "proxies" for...