Yahoo, Inc.’s attempt to halt a text spam lawsuit failed after the U.S. District Court for the Southern District of California at San Diego denied the company’s motion for summary judgment.  The Court also held that, absent prior consent, even a single “confirmatory” text message using an autodialer could constitute a violation under the Telephone Consumer Protection Act.

Yahoo! was sued by Rafael Sherman for sending him an text message alleged to be in violation of the Telephone Consumer Protection Act (TCPA).  According to the complaint, although Sherman had not provided Yahoo! with his cell phone number, he received a text message from a Yahoo! user who used Yahoo’s Mobile SMS Messenger Service (which allows Yahoo! users to send free texts to mobile devices from their computers).  Just prior to receiving the message, Sherman received an unsolicited text from the company itself, which read:

“A Yahoo! User has sent you a message. Reply to that SMS to respond. Reply INFO to this SMS for help or go to y.ahoo.it/ imsms.”

Sherman alleged that Yahoo! used an autodialer to send the text, in violation of the TCPA, and sought statutory damages for himself and all class members of between $500 and $1500 for each violation.

Under the TCPA, a company must obtain prior express consent before sending autodialer texts to a person’s cell phone.

Yahoo! filed a motion for summary judgment, arguing that its “PC to SMS” messaging service, which automatically converts instant messages on a user’s computer into text messages for a mobile device, isn’t an automated telephone dialing system as defined by the TCPA.  However, the court found that a factual dispute existed whether Yahoo!’s equipment could be considered an autodialer after expert testimony was given in the case about the capacity of the company’s equipment to store and randomly or sequentially dial phone numbers.

Yahoo! also tried to use the “confirmatory text” defense – a defense marketers have been using in spam text lawsuits that a single, confirmatory text message was not intended to be covered by the TCPA.  (An example would be a single confirmatory opt-out or ‘STOP’ text sent by a company.) This theory is based on a common-sense theory that when a person voluntarily provides his or her number, he or she implicitly consents to be contacted absent instructions to the contrary. However, the court found the single, confirmatory text defense inapplicable in the Yahoo! case because the plaintiff had not provided Yahoo! with any prior express consent to receive a message, in the  nature of a confirmation/opt-out text or otherwise.

Finally, Yahoo! also tried shield itself from liability under the Good Samaritan exemption in the Communications Decency Act, which provides immunity from liability for Internet Service under certain circumstances when they block or screen offensive materials, which argument the judge also rejected.

In response to consumer outrage over spam-texts, the Federal Communications Commission (FCC) in 2013 enacted new rules banning many “spam texts” under the TCPA.  The law now requires companies to obtain prior express written consent before sending advertisements via text message to a person’s cell phone and allows individuals to file lawsuits for damages for each illegal text if there the law is violated.

If you have questions about illegal spam text messages, contact the law firm of Audet and Partners LLP to learn more about your legal rights.  Call us at (800) 965-1461 or fill out the confidential case inquiry form on the right side of this web page. 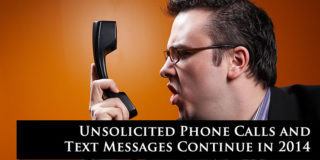 In an effort to curb unscrupulous solicitors and telemarketers, the federal government passed the Telephone Consumer Protection Act...

Audet & Partners, LLP reports that a New York consumer has launched a class action lawsuit in the U.S. District Court for the Southern District of New York against Rite Aid Corp. alleging violations of the Telephone Consumer Protection Act ("TCPA").  In the lawsuit seeking class action certification, lead plaintiff Robert Zani has alleged that Rite Aid placed pre-recorded, unauthorized calls to the cell phones a nationwide class of consumers seeking to market its products and services including flu...

Audet & Partners, LLP reports that Wells Fargo NA has agreed to pay $14.5 million to settle class action claims that the bank illegally called customers on their cell phones in the process of debt collection.  Lead plaintiff Lillian Franklin had brought the lawsuit against Wells Fargo in August 2014 alleging violations of the Telephone Consumer Protection Act ("TCPA"). The lawsuit, filed in the U.S. District Court for the Southern District of California claimed that Wells Fargo had...