Whistleblower Lawsuits Continue to Grow in 2014

Audet & Partners, LLP reports that the U.S. Securities and Exchange Commission (“SEC”) has released its report on whistleblower complaints for Fiscal Year 2014 which ended on September 30, 2014.  The Report stated that the SEC received 3,620 tips from whistleblowers in 2014, an increase from 3,238 in fiscal 2013.

In its continuing efforts to encourage whistleblowers to come forward with tips, the SEC also noted a renewed focus on promoting the anti-retaliatory provisions of the Dodd-Frank Whistleblower or “False Claims” Act.  In one case involving alleged retaliation by an employer, the SEC was able to settle with the employer for $2.2 million.

Audet & Partners, LLP continues to investigate whistleblower claims by employees who may have witnessed corporate activity that defrauded the government.  If you believe you may have witnessed such activity, you are urged to contact a whistleblower attorney at Audet & Partners, LLP for a free, confidential consultation either by calling (800) 965-1461, or by completing and submitting the confidential inquiry form on the right side of this page.

Whistleblower Protection Provided Under SEC Law Federal law mandates that, if a company is publicly traded, they must...

What is a Whistleblower? A whistleblower is a person, usually an employee, who reports the illegal practices or misconduct of an individual, company or even a government contractor. There can be both internal and external whistleblowers. For example, an employee could report the misconduct of a co-worker to their supervisor or they could report the company to an outside entity, such as the media, a watchdog organization or a government agency. It is important to note that a... 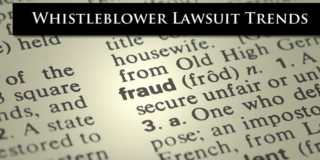 Audet & Partners, LLP has learned that the Securities and Exchange Commission is poised to pay out around...