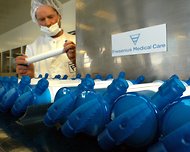 Fresenius Medical Care treats more than a third of the Americans receiving dialysis. It also is a supplier of dialysis machines.

The company, Fresenius Medical Care, treats more than a third of the estimated 400,000 Americans receiving dialysis. It also is the leading supplier of dialysis machines and disposable products, which are used by many clinics in addition to its own.

Last November, Fresenius’s medical office sent an internal memo to doctors practicing in the company’s dialysis centers, warning them that failure to properly use one of the company’s products appeared to be contributing to a sharp increase in the risk of patients dying suddenly from cardiac arrest.

“In light of these troubling findings,” the memo said, doctors should take corrective action. “This issue needs to be addressed urgently,” the memo added later.

But Fresenius, which is based in Germany, did not immediately warn other centers that use the product, which is known as GranuFlo. It did so only in late March after the F.D.A. received, anonymously, a copy of the internal memo and questioned the company about it.

“Personally, I’m troubled by the fact that Fresenius on its own initiative didn’t notify its entire customer base of this particular concern,” Steven Silverman, director of compliance for the F.D.A.’s medical devices division, said in an interview this week.

Mr. Silverman said the agency could issue a warning letter to Fresenius if it determined the company should have reported the safety concerns. But even if the company had no legal obligation, he said, “Candidly, I just think it’s bad business and not in the interest of public health to sit on information about risks.”

Dr. Thomas F. Parker III, chief medical officer at Renal Ventures, a dialysis chain that uses Fresenius products, agreed. “If the data was sufficient to warn their doctors, then all users of the product should have been made aware of it,” he said.

Dr. Franklin W. Maddux, the chief medical officer for Fresenius in North America, said his office, which wrote the memo, was in charge of the company’s own centers and had no way of communicating with noncompany clinics except through papers in medical journals. He said the findings of the internal memo were too preliminary to warrant a publication.

“I felt that it was not in a condition for general consumption,” he said in an interview.

But Fresenius’s products division, which sells GranuFlo, could have communicated with customers. A company spokesman said that the division did not think a notice was necessary because the internal memo did not contain specific reports of adverse events related to GranuFlo.

The existence of the internal memo and subsequent controversy was first reported by RenalWEB, a Web site devoted to dialysis. RenalWEB estimated that 125,000 patients in non-Fresenius clinics are treated with GranuFlo.

Dialysis takes the place of the kidneys in clearing toxic waste from the blood. Part of this involves providing bicarbonate, an alkaline substance, to neutralize the acid that builds up in the blood.

Many doctors apparently have not been accounting for this extra bicarbonate contribution from GranuFlo when deciding how much bicarbonate to prescribe separately. The result can be, in effect, an overdose of bicarbonate, which some recent studies have suggested could lead to heart problems.

Fresenius has its defenders. Dr. Richard Ward, a professor of medicine at the University of Louisville, said that GranuFlo’s label provides enough information for doctors to figure out how to adjust dosing appropriately. “There are a lot of people who have a responsibility here in using a product how it is meant to be used,” he said. “To dump all the responsibility on the manufacturer is not quite right.”

After Fresenius notified its customers in late March, the F.D.A. issued an alert in late May that applied to all products like GranuFlo.

Dialysis centers across the nation are now checking bicarbonate levels in patients and adjusting doses if necessary.

Dr. Daniel Coyne, director of hemodialysis at Washington University in St. Louis, said 30 percent of the patients there had bicarbonate levels in their blood that were too high.

“A four- to sixfold increased risk of in-center cardiac arrest is very concerning,” Dr. Coyne said in an e-mail. “My partners are all trying to figure out a fix to this problem.”

A version of this article appeared in print on June 15, 2012, on page B3 of the New York edition with the headline: Dialysis Company’s Failure to Warn of Product Risk Draws F.D.A. Inquiry.

Get Free E-mail Alerts on These Topics

Adding Citrus to Salads and Desserts

Ask Well: Is It Good to Sweat?